I laid on the hospital couch, looking at the screen during my cystoscopy thinking, “What on earth is that?” My mind was all muddled; I had to close and reopen my eyes to make sure that I wasn’t seeing things. My heart was sinking; I became aware that the room had fallen silent. A Consultant then walked over to me and said “You do realize, it is most likely Cancer,” — and that's how I found out I had cancer.

My mind was screaming

I remember the consultant continuing speaking to me, but I couldn’t make out his words. My mind was screaming; I wanted Tim, Tim would make it all okay, just like he had when I had the sepsis. I sat in the discharge area waiting for them to let me go home, when a Nurse came and told me that they were going to get Tim. As he walked in, I blurted out “They have found a tumor,” and he went grey and fell at my knees.

You often see advertisements on the TV saying how no one is prepared for those words, “You have cancer,” and until they are said to you, you have no idea how you will react. For me, it was disbelief. My GPs hadn’t appeared that worried about my UTI; hell, I wasn’t overly worried, and now I had to face the worse thing that could ever happen to me.

The nurse tried to comfort me

We were ushered into a side room, where the Nurse explained that actually, I should be happy, as Bladder Cancer is one of the easiest cancers to treat, and if it comes back, then they just keep “scooping it out.” Here in the UK, Bladder Cancer does indeed cost the NHS the most amount of money each year due to its high recurrence rate. We did feel better hearing this news.

Needing to tell others

On the way home, still shell shocked, I wanted and needed to tell everyone. Looking back, I think I felt the more people I told, the more it would feel real. Our son was out with his girlfriend, so I asked him to come home as I needed to chat. He pushed and wanted to know why, so I ended up telling him over the phone. “Don’t worry,” I said, “the Nurse says it is going to be ok, and it’s the best type of cancer to have.” And that is how I told everyone: my family, my boss, my close friends. It certainly didn’t seem as bad as I thought it could be. It broke my heart having to tell them; I think I got more upset for them than I was for myself.

I told Tim that we could cry on the way home, but that was it. I wasn’t going to cry over something that seemed so easy to get rid of; in fact, I almost felt like a phoney. After all, it had been played down, almost like it wasn’t a “proper” cancer to have. Even now, I am still so shocked at the naiveté and how underplayed it was when it was explained to us.

My mind was racing with thoughts for the future

I don’t think there is a “right” or “wrong” way to tell people. Let’s face it, they are going to be as shocked as you. Your mind will be racing with all sorts of things, thoughts for the future like “Am I going to die?”, “What happens next?”, “Oh my goodness, I actually have cancer,” “Did I leave the oven on?” (yes, yes I actually thought that). You need to take time to process it; you will be in shock and will be dazed.

The next few days were a blur

However you deal with it will be the right way for you. That night, we came home, and I soon got drunk on prosecco and ate so many cupcakes in one go I felt sick! I just wanted to silence my head, make it all stop! The next few days were a blur; I do know that there were lots of cupcakes and lots of prosecco. It sort of became one big party, my close group of friends were there with cupcakes, candy floss and giggles. We even had small purple love hearts tattooed on our fingers. Purple for healing and the heart because my house is filled with love hearts. 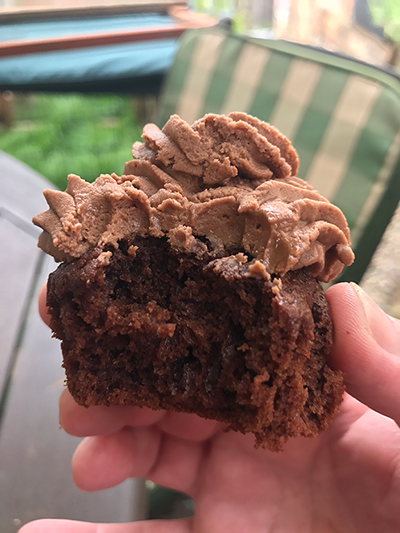 10 comments
This article represents the opinions, thoughts, and experiences of the author; none of this content has been paid for by any advertiser. The BladderCancer.net team does not recommend or endorse any products or treatments discussed herein. Learn more about how we maintain editorial integrity here.

Have your views towards bladder removal changed since you were diagnosed?