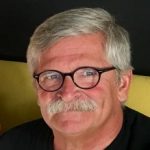 Bladder cancer doesn’t care about boundaries. Doesn’t matter what street, town, city, state or country you live in. It doesn’t care about trade agreements or political persuasion. It will attack anywhere and anyone it feels like. I’m from the great white north, aka Canada, and I know.

All I could see was red

I woke up one morning eight years ago at six a.m. to get ready for work, and my first stop was the washroom. Still groggy, I wasn’t paying too much attention, but when I looked down into the toilet bowl all I could see was red, my blood. That grabbed my attention. I was scared.

I woke up my wife, gently, and told her I was going to the hospital, not to
worry, I thought I had a bladder infection. Fifteen minutes later, I walked into emergency at Mt. Sinai hospital in Toronto, told them what was happening, and they took me right away.

An hour later, they had completed an MRI, and the emergency doctor came with the results. He told me I had a “fleshy mass” in my bladder and that it could be one of three things: stones, an infection or, worse case scenario, cancer.

When I heard the “C” word, my blood ran cold. I told him we were headed
to Hawaii in a week for our Christmas vacation, and I worried I’d have to cancel. He replied that he wanted me to see a urologist and that it would be January before I could get an appointment. He prescribed antibiotics and sent me home saying the hospital would contact me.

I didn’t want to alarm my wife, so I said I had an infection, was on medication, and the hospital would follow up. Two days later they called and set the appointment for January 12, 2009. We enjoyed our Hawaiian vacation but the “infection” was always in the back of my mind.

I arrived at Mt. Sinai on the prescribed date and was lead to the cystoscopy room.

I changed, put on the hospital gown, and went into the operating room. It was bright, and cold, but the nurses and doctors on hand warmed the rook with their empathy and compassion.

Mt. Sinai is a teaching hospital, so a resident conducted the cystoscopy with the guidance of Dr. Jarvi, the head of urology. I watched on the TV screen as the camera moved from the milky white side of my bladder to black. The lens was refocused to reveal not one, but four dark nasty tumors. The resident was stunned and said they’d have to be removed.

“When will you know if they’re malignant?” Was my question.

He responded matter-of-factly, “Oh they’re malignant, you have cancer.”

BANG, my world changed in an instant. Dr. Jarvi said he’d refer me to the
oncology department and they’d contact me. I dressed and left the room.

My wife waited outside. We got on the elevator, and I gave her the news.
Her face went white, and she broke down. I put my arms around her, and my tears started to flow. We were about to embark on a very long journey.