Mom's Entry into this World

I've heard many cancer survivors say that they remember exactly where they were or what they were doing when they found out they had cancer. I imagine this has to be true, as I remember in vivid detail where I was when I found out Mom had cancer again. That moment plays over and over again in my mind, as though I am reexamining it to try to find a different outcome.

No stranger to the battlefield

Mom was diagnosed with breast cancer around 2004. I must admit I was not as present for this battle as I would be for subsequent battles. I was in my early 20s and didn't really take cancer seriously. To me, we lived in modern, miraculous times, and I completely trusted the advancements of medicine and science.

After a successful lumpectomy and radiation, she was deemed cancer-free. I was not surprised at all - I knew her strength.

Another visit to the ER, another diagnosis

Before long, Mom was getting weak frequently. She was experiencing night sweats and suffering severe lethargy with unexplainable body pain. At a regular doctor's appointment in 2007, they took her vitals and immediately rushed her to the emergency room across the street. She didn't know why.

After prodding, poking, scanning, and many manners of testing, the doctors delivered the shock of a lifetime: B-cell Non-Hodgkins lymphoma and pure red cell aplasia (PRCA).

I remember my sister calling me and telling me the news. Again, I was young and believed in the miracles of science. I don't think I was very concerned at first, because I remember my sister reiterating, "We need to take this seriously. Mom is in trouble. She needs our help."

The world seemed to suddenly shrink away. I was present to a rush of fear and danger suddenly, a feeling that would become far too familiar over the next few years.

Mom in trouble? That didn't seem possible. My Mom was the strongest person I know, who went through some unbelievable struggles in her life to that point. How could my hero possibly be in trouble?

Staring down the barrel and looking for the light

The next five years were absolute torture on all of us. The lymphoma morphed time and again. Each time was a challenge to treat with her rare anemia. She was always running out of blood and needed weekly transfusions.

Treatment options were always limited, she never qualified for any trials, and there were no cures for her slow-growing lymphoma. In my desperation, I began poring over any literature I could find.

While at the university hospital library, I researched and had packets of information mailed to me. I learned about "watch and wait," the lymphoma leukemia spectrum, drug trials in Europe and Asia, and so much mind-numbing information.

I remember thanking my lucky stars when the lymphoma morphed again into a treatable version! A few rounds of Bendamustine and she was free of lymphoma. By accidental overdose of her anti-rejection medicine, she also put her rare anemia into remission. Suddenly, in 2012, my Mom was in remission from two rare, incurable diseases.

Mom started to suffer side-effects from the chemotherapy and torture of the 5-year lymphoma-anemia battle almost immediately.

Her teeth began rotting and she eventually had to have all of her upper teeth pulled. She was frequently uncomfortable and had dull body pains. Most disturbing for her, she was beginning to have increased urinary issues. She had always had bladder infections from as far back as I can remember, so it didn't catch my attention at first. Mom didn't complain much, so we just went on living.

I realized something was off when she came to see me play my dream role in the rock musical "Rent." After the show, she told me she had the pee the entire first act and couldn't focus on the show.

She was writhing in discomfort and just praying for the first act to end so she could run to the restroom. This saddened me because she didn't get to enjoy herself, which was one of the main reasons I performed.

Many years later, Mom mentioned her urinary discomfort again. She had tried to get an appointment at the university hospital, but they didn't take her seriously. "Something is wrong!" she would say, but her words fell on deaf ears.

She kept getting referred back to her local primary care physician. I was shocked to find out later that she never had a cystoscopy during this period.

Things came to a head in 2019. Mom was getting so many "bladder infections" that it seemed she was always taking antibiotics. Literally dozens of bottles of pills.

Her urinary urgency was getting completely unbearable for her. She was feeling an extremely intense need to urinate but having little to nothing come out. One time while driving, I had to pull over so she could urinate on the side of the road. This was completely out of character for her! I knew something was wrong. In late 2019, she began bleeding. Again, more antibiotics.

Then the Coronavirus pandemic hit.

In early 2020, she was emailing doctors desperately trying to get an appointment. No one would see her. The bleeding was becoming more regular, although "light lemonade" colored. Finally, once the bleeding had gotten too bad to play down and ignore, my stepfather took her to the ER.

Have you or someone you loved suffered from misdiagnosed bladder infections that ultimately led to a bladder cancer diagnosis? 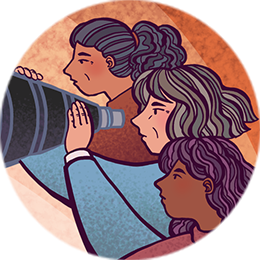 Connect with other bladder cancer members!

Have a question? Ask - we’re here for you!
Visit our forums
Share your unique bladder cancer experience! It could help someone else feel less afraid.
Share your story here
Learn about the complexities of bladder cancer for women.
Check it out!

For The Next Me

Menopause After Bladder Cancer Surgery: The Joys of Being a Woman

1 comments
This article represents the opinions, thoughts, and experiences of the author; none of this content has been paid for by any advertiser. The BladderCancer.net team does not recommend or endorse any products or treatments discussed herein. Learn more about how we maintain editorial integrity here.