Hello everyone, my name is Sylvia and at the of 68, I found out in the worst way possible, that I had bladder cancer. ☹ I retired from working in November 2019 and was looking forward to traveling and enjoying my husband and family.

In May 2020, I noticed my urine was a light pink. Foolishly, I thought it was the watermelon I had eaten and paid it no mind. But, a few days later the pink turned to red, and I knew it was blood and that something must be wrong. I scheduled an appointment with my doctor, who is amazing! She immediately ordered labs I could do right and prescribed medication in case it was just a urinary tract infection. She also decided to go ahead and schedule new blood work to be repeated in 2 days. It alerted her to refer me to Urology. She did not make any possible diagnosis, just the referral.

Due to COVID, the Urology Clinic contacted me by phone. I spoke to a young lady who spoke like there was something wrong but didn’t make it clear what was going on and I wasn’t sure what to think or ask. I was then told I would be scheduled for a biopsy in June, to determine if I had cancer. She stated I had a 70% chance but didn’t make it clear if it was a 70% chance for or against a diagnosis of cancer, nor did she explain it was bladder cancer and what that was. I got off the phone confused but hopeful that the 70% was for it not to be cancer.

On 28 June, upon arriving at the hospital with my husband, I was asked if I knew why I was there. I replied it was to have a biopsy. The technician looked at me strangely, and said, “no ma’am, you are here to have some cancerous tumors removed from your bladder.” My husband and I were in shock to hear this and didn’t know what to say or think. The technician told me that I could refuse to go through with the surgery, but of course, that didn’t make sense to me, because I knew now that I had cancer and I certainly didn’t want to wait for another appointment to have the tumors removed if I get it done then. I must admit I was a little angry and confused. No one had even explained to me that I had cancerous tumors in my bladder, and I had never even heard of bladder cancer, so now I am just plain scared, as I am sure my husband was too.

Right before I was given anesthesia, the urologist who was performing the surgery did come in and speak with us. He explained then that I had a total of 3 large tumors in my bladder. He then stated it was highly unlikely that he would be able to remove all 3 tumors during one surgery and that I would likely require a second surgery. Unfortunately, he was correct and in July 2020 I had to have another surgery to have the one remaining tumor removed.

Thankfully, today I am cancer-free. I am currently participating in a clinical trial being conducted by M.D. Anderson Cancer Medical Center, to help the United States to be cleared to obtain more BCG as it is becoming more and more difficult to treat bladder patients with BCG treatments due to the lack of availability of the BCG. I am happy to be able to participate and help with this noteworthy cause. I am scheduled every 3 months to see my urologist for a Cystoscopy to rule out any new cancer cells. I am grateful to God that so far, all the results have been negative. I am then free to continue with my BCG treatments, which are going well.

I can only say I am thankful to be doing so well! I feel great and stay at the gym to remain healthy and for the most part, try to eat healthily. I did have to go through a rough period that required me to seek counseling, which I attribute to knot being well informed and given the understanding of what bladder cancer was, that I already had it, what it would mean for my future, etc. I eventually also received the support I needed from a new urologist who answered all my questions and provided me with enough information that I had a better understanding of what I was going through. He assured me that I would always be advised on what to expect should things change and provide me with suggestions on where to go from there. He has been true to his word which has given me the confidence I need to move on with my life.

My Hopes For the Future

I hope all doctors in the field of Urology are all given the knowledge and training needed to provide bladder patients with the information they need upfront because they are the first ones we see.

It is my hope no one experiences the anger, frustration, and just plain being scared from not knowing what is going on.

I hope to be able to advocate for bladder cancer patients everywhere and be a voice for them, support for them, whatever I can do. It’s coming up on a year of my being cancer-free!!! I am living each day without worrying about tomorrow…. just enjoying each day and no longer afraid of what might happen. Should the cancer return, I know I will be able to deal with it as I am well prepared with the knowledge of what choices I have and how I want to continue living my life! 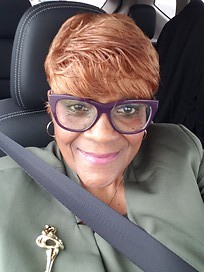 This is me and this is my story.

Getting the Bladder Cancer Message to Congress

7 comments
This article represents the opinions, thoughts, and experiences of the author; none of this content has been paid for by any advertiser. The BladderCancer.net team does not recommend or endorse any products or treatments discussed herein. Learn more about how we maintain editorial integrity here.